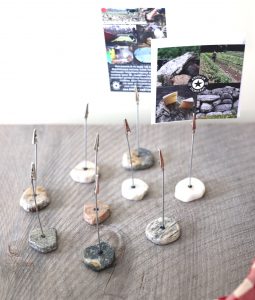 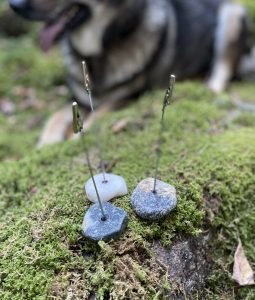 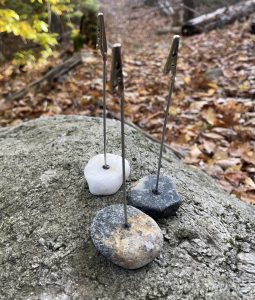 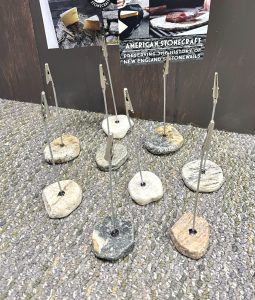 Clip holder with tumbled stone base

These smooth tumbled clip holders are made from fieldstone remnants that American Stonecraft hand-gathered at farms in New England. This is a special blend of colors, from or favorite larger pieces like you see in Food Slabs, Trivets, and Coasters, but smaller, and with a clip.

Why a clip? Photo of a friend, label for a cheese or recipe, raffle donation cards, place settings for vips or guests of honor. Petite, but also sturdy enough to keep from tipping over. Appropriate use of the medium.

If you have special requests regarding color, please put that in the order notes or contact us prior to placing the order. However, our typical practice is to take a photo and send it over to you, hopefully with extras so that you can circle and send back the edited photo after picking your favorites.

If you want us to decide, you are welcome to simply mention color preferences or let us decide something with a harmonious aesthetic and send that directly without the back and forth.

Color varies dramatically from piece to piece, so if you would like to review a selection before we ship, simply mention this in the comments. You are welcome to provide preferences in your order notes and we will do our best to accommodate your request. Some examples of color requests would be a ‘full range’ of colors, ‘neutral’, ‘greens’, “red brown’, ‘pinks,’ or ‘blue/grays’ preferred.

Please note that requesting this change will delay your order slightly.

About 8,000 years ago, icy glaciers pushed boulders into the soil of America’s Northeast. As a result, a fresh crop of rocks ‘grow’ each spring when the winter’s freeze-thaw cycles force buried stones upward, a process called granular convection. In the 1890s, before the railroads opened up rock-free farmlands in other parts of the United States, farmers removing stones from their fields piled them into what eventually became 215,000 miles of stonewalls, a distance greater than from the earth to the moon! These stonewalls became the folklore of poets like Robert Frost, and the landscape of the Northeast United States. Because clearing rocks is never complete, American Stonecraft partners with working farms to sustainably harvest their fresh rocks and transform them into functional heirlooms. Not only does this endeavor share geology that has never been seen before, but it helps support working farms, preserving open space and protecting the stonewalls that are so iconic to this region. Like many of us, the founder of American Stonecraft, Gerald Croteau, fell in love with these archaeological stone ruins as a youth. However, he became an economist and founded American Stonecraft in his late 20s after seeing the inside of a fieldstone for the first time. He was amazed at what he had overlooked for so long, and realized that there was a sustainable supply of these rocks that farmers could share at their farmstands. Diamond tools (being a relatively modern invention) revealed amazing colors, patterns, and geologies in the humble New England farm-gathered fieldstone that he wanted to help share with others! Gerald rolled up his sleeves, spent several years as an independent craftsman touring at local arts and crafts shows, and taught himself how to make a number of fascinating products. We are now a small team of artisans, and each piece is signed by its maker(s), and produced under Gerald’s direct supervision.