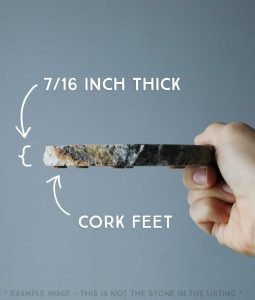 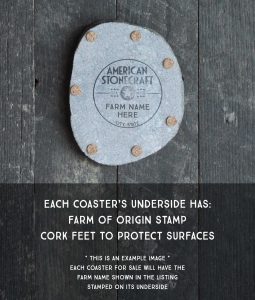 We made this stack of Coasters from a single fieldstone that we hand-gathered at the place listed above. Visit our Farms page to discover farm stories and see our photos of our visits. Each stone’s provenance and artisan is permanently labeled on the underside. The tag will list the serial number we archive in our permanent records. If you would like multiple tags (with serial # data) for multiple gift recipients, please request this in the order notes. Artisans sawed and polished the rock with diamond tools in our Lowell, MA studio. Now you can use this artwork as bucolic household accents or to absorb condensation around your favorite cold beverage. The stone is also a trivet for hot dishes, or use as a resting place for a candle, plant, or other treasure.

SPECIAL WRITE UP by Scientist and Explorer Bart Jarek

Ultra-rare, magnetic Cumberlandite !
This highly unique slice of ‘glacial erratic’ gathered from Jamestown Island, and even more rarely found on Martha’s Vineyard Island, tells half a billion years of regional geology. Pushed by glaciers after its formation, the bedrock outcrop motherlode source of this extremely rare iron-rich stone is found only one place on Earth, in a small hill in northeast Rhode Island, outside of Cumberland. It is the official State Rock of that state.
Cumberlandite was the common name given to this very rare, strange, magnetic, igneous rock, now known in geology as “porphyritic titaniferous magnetite melatroctolite ” — perhaps the heaviest stone you can find on the entire East Coast.  It has a uniquely high composition of ore minerals, including titanium-bearing ilmenite, magnetite, and olivine, making it unusually magnetic. Large, tabular calcium-silica feldspar plagioclase crystals float curiously parallel in the dark, heavy, magnetic mineral matrix. It has a magnetic field four times that of the Earth.
Geologists still puzzle over it’s formation & composition. It was apparantly forged and cooled deep in the belly of a volcanic island, far away in the southern hemisphere, some half a billion years ago.  As part of the ‘volcanic island arc’ , known in geology as Avalonia, it drifted north across the ancient Iapetus Ocean and eventually collided with the continental coast of Laurentia (the core of which later became North America). The bedrock of this volcanic island arc micro-continent, containing the pluton deposit of cumberlandite, got compacted or accreted into Laurentia, when Laurentia collided with Baltica (europe), then the Gondwona continent moving in from the South (eliminating the Iapetus Ocean). These collisons formed the super continent of Pangea, and the Appalachian Mountains.   Eventually, the supercontinental crust rifted and split through the middle of Pangaea, spreading open to create the Atlantic Ocean, and leaving the Avalonian bedrock, welded to Laurentia/ North America, as a strip of accreted crust called an ‘exotic terrane’. Avalonian terrane extends from southern New England, across eastern Maine, eastern Newfoundland, and across to Ireland, southern England & Wales, the Netherlands, and parts of Germany & western Poland! Spain also includes pieces of Avalonian terrane.
This small pluton hill of iron & minerals in Rhode Island ( called Iron Mine Hill) is embedded in what is now inland coastal North America — but it did not originate as part of North America! Cumberlandite is mistaken for meteorite because of it’s extraordinary heft & magnetism. It was mined for ore & commercial uses over the generations. A colonial graveyard sits next to the hill, mysteriously incorporating magnetic stones into it’s construction.  Iron Mine Hill is now a protected town property. Glacial grooves scraped into the unquarried bedrock are still visible, pointing southeast to where this stone was found 15,000 years later. Martha’s Vineyard Island is the furthest southeast from Cumberland, Rhode Island on earth where ultra-rare cumberlandite can be naturally found, helping to define the margins of glacial movements since the last ice age. However, this specimen was gathered on Jamestown Island, Rhode Island.

NOTE Fieldstones being natural, have minor, non-structural fissures, pocks, scratches, chips, and other superficial flaws that we affectionately call beauty marks. View the Sizing tab for measurements (Length x Width x Height) and Weight (in pounds). All product photos of a particular product type (ie Food Slabs or Coasters) are photographed from approximately the same distance with the same lens. Therefore, you are welcome to compare size and shape from listing to listing as they are a somewhat representative scale. Each wooden strip is 3″ wide.

THE FARM–TO–TABLE STORY About 8,000 years ago, icy glaciers pushed boulders into the soil of America’s Northeast. As a result, a fresh crop of rocks ‘grow’ each spring when the winter’s freeze-thaw cycles force buried stones upward, a process called granular convection. In the 1890s, before the railroads opened up rock-free farmlands in other parts of the United States, farmers removing stones from their fields piled them into what eventually became 215,000 miles of stonewalls, a distance greater than from the earth to the moon! These stonewalls became the folklore of poets like Robert Frost, and the landscape of the Northeast United States. Because clearing rocks is never complete, American Stonecraft partners with working farms to sustainably harvest their fresh rocks and transform them into functional heirlooms. Not only does this endeavor share geology that has never been seen before, but it helps support working farms, preserving open space and protecting the stonewalls that are so iconic to this region. Like many of us, the founder of American Stonecraft, Gerald Croteau, fell in love with these archaeological stone ruins as a youth. However, he became an economist and founded American Stonecraft in his late 20s after seeing the inside of a fieldstone for the first time. He was amazed at what he had overlooked for so long, and realized that there was a sustainable supply of these rocks that farmers could share at their farmstands. Diamond tools (being a relatively modern invention) revealed amazing colors, patterns, and geologies in the humble New England farm-gathered fieldstone that he wanted to help share with others! Gerald rolled up his sleeves, spent several years as an independent craftsman touring at local arts and crafts shows, and taught himself how to make a number of fascinating products. We are now a small team of artisans, and each piece is signed by its maker(s), and produced under Gerald’s direct supervision.

- Hand wash a Trivet with warm water and dish soap - Use as a tray for plants, a protective trivet for candles, or bucolic accent inside your home - Safe (and recommended for!) chilling in fridge or freezer - Safe for hot pots and pans 21486 – Stack of 2 Trivets from Allandale Farm in Boston Massachusetts

21525 – Stack of 4 Coasters from Gay Head in Aquinnah Massachusetts 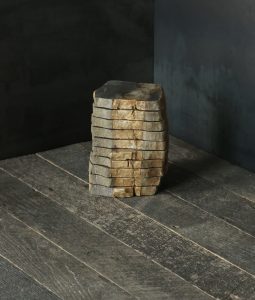 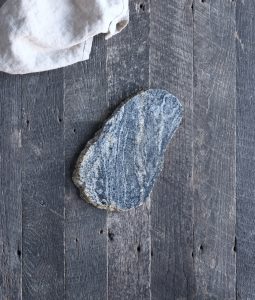 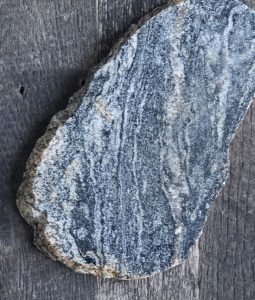 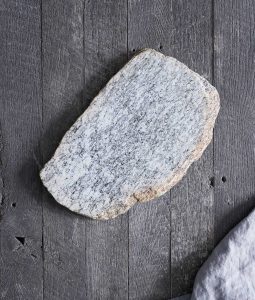 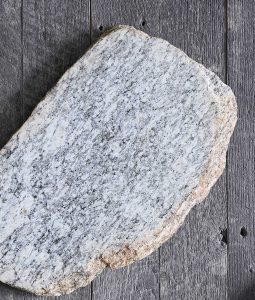 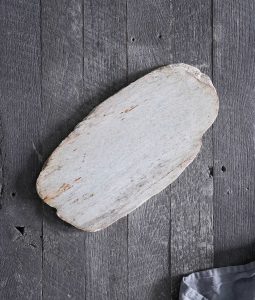