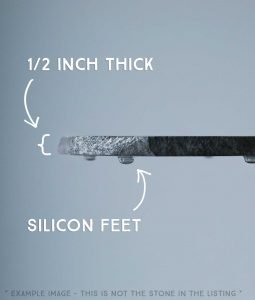 We made this food-safe Food Slab from cumberlandite that we hand-gathered at the place listed above. Artisans sawed and polished the rock with diamond tools in our Lowell, MA studio. Now you can use this artwork to serve cheeses and meats, as a bucolic design element, as a resting place for a spoon, candle, beverages, plants, or other treasures. The stone is also a trivet for hot dishes. Each stone’s provenance and artisan is permanently labeled on the underside.

Food Slabs most often begin as freshly “grown” fieldstones that American Stonecraft sustainably hand-harvests at working farms. However, for our Notable Places series, we gathered a stone or two from a special place to show what can be found there and share this with the public. Each rock is unique in shape and color, comprised of metamorphic granite. Artisans craft each Food Slab from scratch in our Massachusetts studio using custom tools. The stone is transformed from a dull rock into a piece of art with impossibly brilliant color. This color is not the result of an outside product or lacquer, but of skilled grinding and polishing, smoothing away all roughness up to a 10,000 grit. Food Slabs also retain the natural “live” edge from the stone’s glacial tumbling.

All Food Slabs are protected with a permanent food-safe fluoride-based seal that penetrates any microscopic pores to prevent staining and allow for easy cleaning with soap and water. Provenance and your artisan is permanently labeled on the underside of each Food Slab and clear silicon feet have been added to protect tabletops. Each stone arrives packaged in an American Stonecraft gift box with your personalized gift note, if applicable.

A Food Slab is perfect for serving charcuterie, as a cheese board, or as a Trivet. For more inspiration, read our 101 Things to do with a Food Slab article.

This highly unique slice of ‘glacial erratic’ found on Martha’s Vineyard, exposed by erosion, tells half a billion years of regional geology. Pushed by glaciers to what became the Island of Martha’s Vineyard, the bedrock outcrop motherlode source of this extremely rare iron-rich stone is found only one place on Earth, in a small hill in northeast Rhode Island, outside of Cumberland. It is the official State Rock of that state.

Cumberlandite was the common name given to this very rare, strange, magnetic, igneous rock, now known in geology as “porphyritic titaniferous magnetite melatroctolite” — perhaps the heaviest stone you can find on the entire East Coast. It has a uniquely high composition of ore minerals, including titanium-bearing ilmenite, magnetite, and olivine, making it unusually magnetic. Large, tabular calcium-silica feldspar plagioclase crystals float curiously parallel in the dark, heavy, magnetic mineral matrix. It has a magnetic field four times that of the Earth.

Geologists still puzzle over it’s formation & composition. It was apparently forged and cooled deep in the belly of a volcanic island, far away in the southern hemisphere, some half a billion years ago. As part of the ‘volcanic island arc’ , known in geology as Avalonia, it drifted north across the ancient Iapetus Ocean and eventually collided with the continental coast of Laurentia (the core of which later became North America). The bedrock of this volcanic island arc micro-continent, containing the pluton deposit of cumberlandite, got compacted or accreted into Laurentia, when Laurentia collided with Baltica (europe), then the Gondwona continent moving in from the South (eliminating the Iapetus Ocean). These collisions formed the super continent of Pangea, and the Appalachian Mountains. Eventually, the supercontinental crust rifted and split through the middle of Pangaea, spreading open to create the Atlantic Ocean, and leaving the Avalonian bedrock, welded to Laurentia/ North America, as a strip of accreted crust called an ‘exotic terrane’. Avalonian terrane extends from southern New England, across eastern Maine, eastern Newfoundland, and across to Ireland, southern England & Wales, the Netherlands, and parts of Germany & western Poland! Spain also includes pieces of Avalonian terrane.

This small pluton hill of iron & minerals in Rhode Island (called Iron Mine Hill) is embedded in what is now inland coastal North America — but it did not originate as part of North America! Cumberlandite is mistaken for meteorite because of it’s extraordinary heft & magnetism. It was mined for ore & commercial uses over the generations. A colonial graveyard sits next to the hill, mysteriously incorporating magnetic stones into it’s construction. Iron Mine Hill is now a protected town property. Glacial grooves scraped into the unquarried bedrock are still visible, pointing southeast to where this stone was found 15,000 years later. Martha’s Vineyard Island is the furthest southeast from Rhode Island on earth where ultra-rare cumberlandite can be naturally found.

- Hand wash a Food Slab with warm water and dish soap
- Use as a serving platter, trivet, or bucolic accent
- Safe (and recommended for!) chilling in fridge or freezer
- Not designed for microwave, dishwasher, or oven use

19″ Food Slab from Red Tractor Farm in Limington, ME 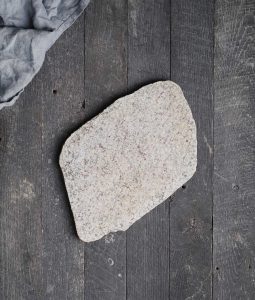 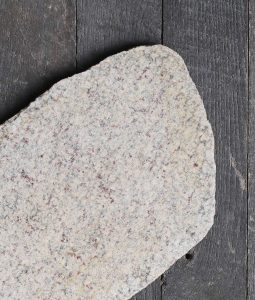